A MUST-SEE SIGHT FOR TRAVELERS TO SOUTHEAST ASIA, THE TEMPLE COMPLEXES IN SIEM REAP, CAMBODIA ARE BEAUTIFUL BEYOND WORDS. FORTUNATELY, HUGH UJHAZY HAS FOUND THE WORDS TO DESCRIBE HIS RECENT EXPERIENCE THERE 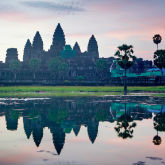 Not so long ago in celestial terms, King Suryavarma II, having beaten his rivals, consolidated the Khymer kingdom and tamed a few elephants, set his sights on an edifice to suit his role as ruler of most of south Asia – Angkor Wat, located in present-day Siem Reap. Building the temple from local sandstone and lava stone, the scale of the structure defies description. Metrics must suffice – surrounding walls nearly half a mile long, central towers (five of them) with the tallest representing Mount Meru, home of the gods. The outer walls signify the mountains enclosing the world, the massive moat, four meters deep, standing in for the oceans. Wide stone walkways allow approach from the points of the compass through the gates breaking the cloistered walls. Each spare space of stone in Angkor Wat is covered with relief carvings – beautiful apsara dancers, moral tales showing heaven, earth and the punishments of hell. Stories of the king and his mighty armies sweeping across their enemies, battle elephants rampan, lines of men in armored finery with spears thrust forward in determined attack.

Passing through the outer wall (having been assured the moat is absent any crocodiles!) open grasses cover the expanse from gate to the first steps ascending the temple. Flanking the raised walkway are the two libraries, one used in the full moon, the other for the new moon. Ahead, the pools for worshippers to bathe before entering the temple (now a site for observing sunrise over the temple). And finally, the steps, and the looming expanse of Angkor Wat.

It serves to pause briefly here before entering the temple compound and take in the vista before you. To right and left, high stone walls separate the temple proper from the courtyard. The steps are sandstone, attesting to the countless feet that have trod them over the past millennia. Completed around the same time as Notre Dame cathedral in Paris, close to a million workers labored in putting it and its sister city of Angkor Thom together. The blocks of stone fit closely and perfectly, some troubled in their course by jungle vegetation and the predation of invaders over the intervening years. Their faces are smooth, the faces of the carved figures offering the texture of silk.

Entering the cool confines of the temple level, we are upon earth. Stairs beckon upwards to heaven. After wandering by the fortune teller deep in conversation with visiting pilgrims, up to heaven and the recently opened spaces at the top of the temple itself.

Only allowing 100 people at a time to ascend the steep stairs (when visiting Cambodia in general and Siem Reap in particular, get used to stairs!) the uppermost level offers unparalleled views across the temple complex and to the jungle beyond. All around the glistened water necklace of the 190-meterwide moat.

Back to the stone work. Some of the blocks are laid out with mortise and tenon joints, allowing them to lock together strongly. Others use dovetails and simple gravity. The blocks add to around 5 million tons, much of it transported from Mount Kulen around 40km to the northeast.

The nearby Siem Reap river is subject to flooding during the wet season with the fresh water lake of Tongle Sap increasing its area by around nine times. Such flooding may have helped move the blocks of stone by raft to nearby the temple site. Estimates put the construction of the temple during Suryavarman’s lifetime, a period of no more than 40 years. Visit at sunrise, at noon, at sunset. This is truly a place to rival the pyramids and the great stone assemblies of Rome and Greece. Restoration continues on the structure, rebuilding the piles of rocks that make up the temple. Only a few kilometers away is the city of Angkor Thom. After the death of Suryavarman in 1150 AD, the great builder King Jayavarman VII (immortalized in many wood and stone statues in craft stores across the region) built his capital near the site of Angkor Wat. Larger than Angkor Wat, home to well known temples including Ta Prohm (now, strangely, referred to as the “Tomb Raider” temple in honour of the movie made in 2001 with Angeline Jolie) and the Bayon temple. Ride the elephants around the perimeter of this extraordinary city, walk its streets and feel the pressure of the jungle, just outside, waiting for the humans to leave once more.

Abandoned for centuries, the temples and structures of Angkor Thom bear the scars of the jungle. Trees extending their roots from the roof of temples and libraries, walls bowed by years of trees resting on their flanks – so much detail to drink in, so many stairs to climb!

Our visit to Siem Reap only covered five days. Never leaving the surrounds of the town, we saw one beautiful site after another. Angkor Wat tempted us back many times but the Lady temple, Bayon temple, the 50-meter looming Preah Khan temple, all took their moment. We also enjoyed the cool nights, the markets of the old town, the lazy pace of tuk-tuk taxis and mopeds, the welcoming smiles and hospitality of the Cambodians.

A friend commented that his visit to Ankor Wat was a seminal moment in his life. I can only agree and seek the next moment when my eyes can drink in the jungle fringed expanse that is this land of majestic temples.

Flights from KLIA and LCCT to Phnom Penh last about one and a half hours; flights to Siem Reap last about 1 hour, 40 minutes. Major carriers include Air Asia and Malaysia Airlines.

This article has been edited for ExpatGoMalaysia.com