With its strategic location along East-West trade routes, Malaysia has been influenced by people from many global destinations. Many parts of the country have seen traders from Arabia, China, Africa, India and neighbouring Southeast Asian countries as well as European powers such as Portugal, Holland and Britain visit Malaysian shores in the early days.

Spices originally lured European traders with nutmeg and mace from the Spice Islands (Indonesia), traded through the port of Melaka which enjoyed a prime location on the Straits of Malacca. The Dutch and British followed, with each one leaving their unique architectural fingerprints on the urban landscape. Here are five fab iconic precincts of these colonial eras. The Portuguese first arrived in 1511 and became the first of three Western colonial powers to rule the port city. The Dutch followed and then the British, but little remains of the Portuguese influence. A Portuguese village to the south of the city centre is Portuguese in name and food only while Porta de Santiago and the ruins of St. Paul’s Church are all that remain of a once-grand Portuguese fortress called A’Famosa.

The Dutch rebuilt it after taking Melaka by force in 1641, but the gate is all that was saved after the British set about destroying the fortifications. Dutch Square is within walking distance of the Portuguese structures and includes the famous Christ Church and Stadthuys built in 1641, the latter of which was once the residence of the Dutch Governor. Possibly one of the grandest railway buildings in the world, the Federated Malay States Railway (FMSR) Building on China Street Ghaut on the island of Penang never actually had a railway connected to it.

Neither did the island, in fact, as the nearest train station as located at Butterworth on the mainland.

Butterworth was first connected by rail to Taiping (founded on tin) in 1900 and then to Kuala Lumpur in 1903.

Prior to air travel and highways, the train was the lifeline for many peninsular residents, and those living on the island bought all-inclusive tickets in Penang that covered passage on the railway ferry steamer to Butterworth and then on the train southwards.

Completed in 1909, the building housed offices, a ticket office, restaurant, and even accommodations, but a planned grand European-styled hotel never eventuated. The building is now occupied by Malaysian Customs and is known as Wisma Kastam. 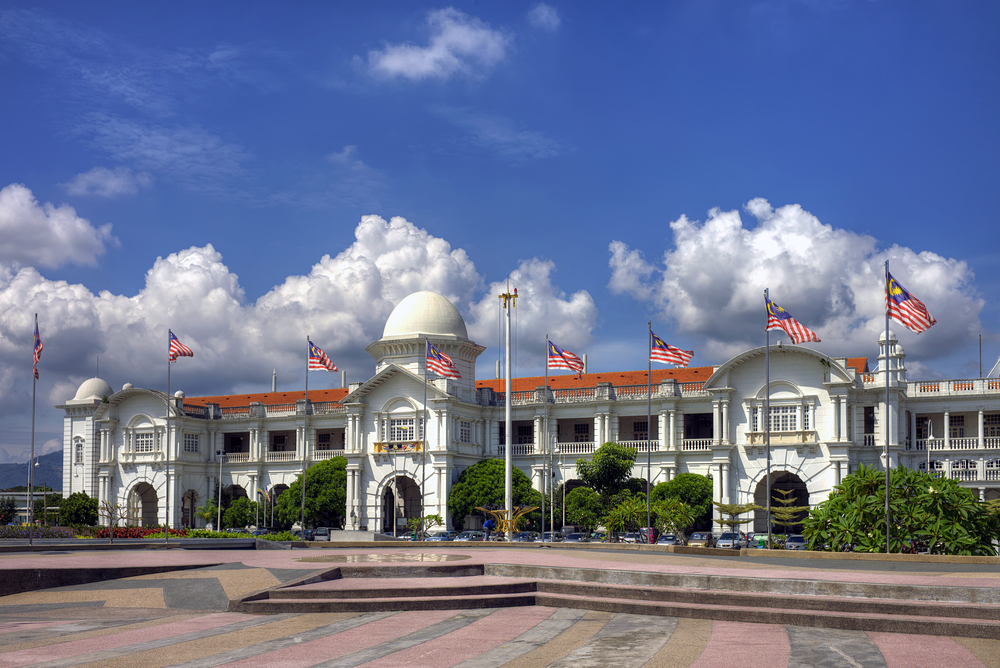 There are a few grand train stations on the peninsula, with Kuala Lumpur’s being a spectacular example of the ‘British Raj’ style. The striking station was designed by Arthur Hubback, an architect who had worked in India and who later turned his talents to the Ipoh Railway Station where he incorporated features to accommodate the tropical climate into the modified Western Classica-styled building.

Ventilation was assured by an arched and covered walkway on the ground floor and a long semi-open verandah on the top floor of the three-storey edifice. Another feature of the British influence was the padang, or field, for sports such as cricket. The Ipoh padang and Ipoh Club are within walking distance of the station. Kuala Lumpur’s main colonial precinct surrounds the padang, or what is now known as Dataran Merdeka, the site where Malaysian independence was

declared on August 31, 1957. The Sultan Abdul Samad Building lines one side of the field while the Royal Selangor Club is on the other. The British started the club in 1884 as the Selangor Club, with the first building in wood and attap being erected on the site in 1895. In 1890, a two-storey structure designed by A.C.A. Norman was built, and in 1910, Arthur Hubback redesigned and extended the building to incorporate a mock Tudor style. Painted in bold black and white colours, timber-framed, mock Tudor-styled houses would have seemed the appropriate architectural style for British colonialists who built retreats in the cooler climate of the Cameron Highlands hill station.

The trend-setter was Ye Olde Smokehouse boarding house which used timber for decorative rather than structural purposes but it appeared to impress others who followed suit. The Lakehouse at Cameron Highlands is another similarly designed boutique hotel in the Cameron Highlands.

This article was originally published in Senses of Malaysia (January/February 2016) which is available in print here.