One of Malaysia’s most iconic cities, the capital of the great land of Sarawak proudly displays one of nature’s most beloved mascot– the cat. From great big monuments to museums, a local higher education institution with the name I-CATS, even to a radio station called CATS FM, the city of Kuching is an absolute feline-lover’s paradise. There’s also celebrated a cat café simply named Meow Meow Café.

While the word ‘kuching’ translates into cat in the national language of Bahasa Melayu, the animal actually is referred to as ‘pusak’ in local Sarawakian dialect. Nonetheless, the City of Cats has quite a few interesting stories linked to its namesake and borderline obsession with the household predator.

One of the more popular stories behind the naming of the town traces back to Sir James Brooke, the first White Rajah of Sarawak who attained his position in a bid to supress piracy, and restoring the Sultan of Brunei to his throne. In the 1800s, he arrived in the now feline-named town and asked what his surroundings were called. A local, supposedly mistaking his gesturing as directed to a passing cat, told him ‘kuching’, hence the name stuck. According to recent historical finds however, claims that the bustling township was called Kuching even before the arrival of Brooke.

Brooke’s assumption of the town called Kuching wasn’t a complete random misunderstanding. An old word for port, in Kerala, India as well as Indochina where Brooke was accustomed to living (given his life’s history as a sea-faring man under the banner of the British East India Company) was called ‘Cochin’. With Kuching being the main landing point of everyone coming into Sarawak, the town was literally a port, and Brooke was simply naming it as he knew it to be.

A more logical assumption would be to relate the town’s name to the river that once ran through it. The Sungai Kuching was little more than a small stream, flowing from a reservoir. The hill where the stream came from was known to be Bukit Mata Kuching, for the fruit trees that grew abundantly on it. Many wild forest cats were also known to be spotted in the area, as the stream was their source of fresh water. Heavy development however, buried the water flow and the stream ceased to exist. The river’s name, as per tradition, was used by the locals to identify the area.

Purportedly the name Kuching stuck after a malaria outbreak in the 1950s. When authorities tried curbing the fever with insecticide, the poisonous after-effects killed many of the local cats. In turn, the rat population thrived, and the threat of plague provided another widespread panic. In desperation, the rulers of Sarawak sought help from the homeland of Britain, and the United Kingdom’s Royal Air Force delivered 14,000 cats to rural Borneo under the file ‘Operation Cat Drop’. This myth is way more far-fetched compared to its other naming theories, but its mass publication is linked to the banning of the DDT pesticide in the US.

Whatever the origin of the Kuching name that has yet to be determined, the cat-proud city is celebrated by everyone regardless of creed, colour, or race for the significance of cats across the cultural spectrum. Malay and Chinese settlers hail cats as a symbol of good fortune and protection, while local aboriginal tribes of the Iban, Bidayuh, Melanau, and Orang Ulu treasure cats for companionship. The result is a beautiful expression of the feline and its historical value showcased by the entire city.

No Food Waste, Remains Converted to Hotel’s Asset Instead 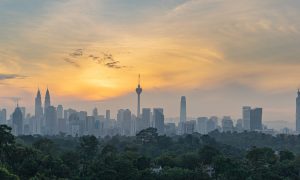