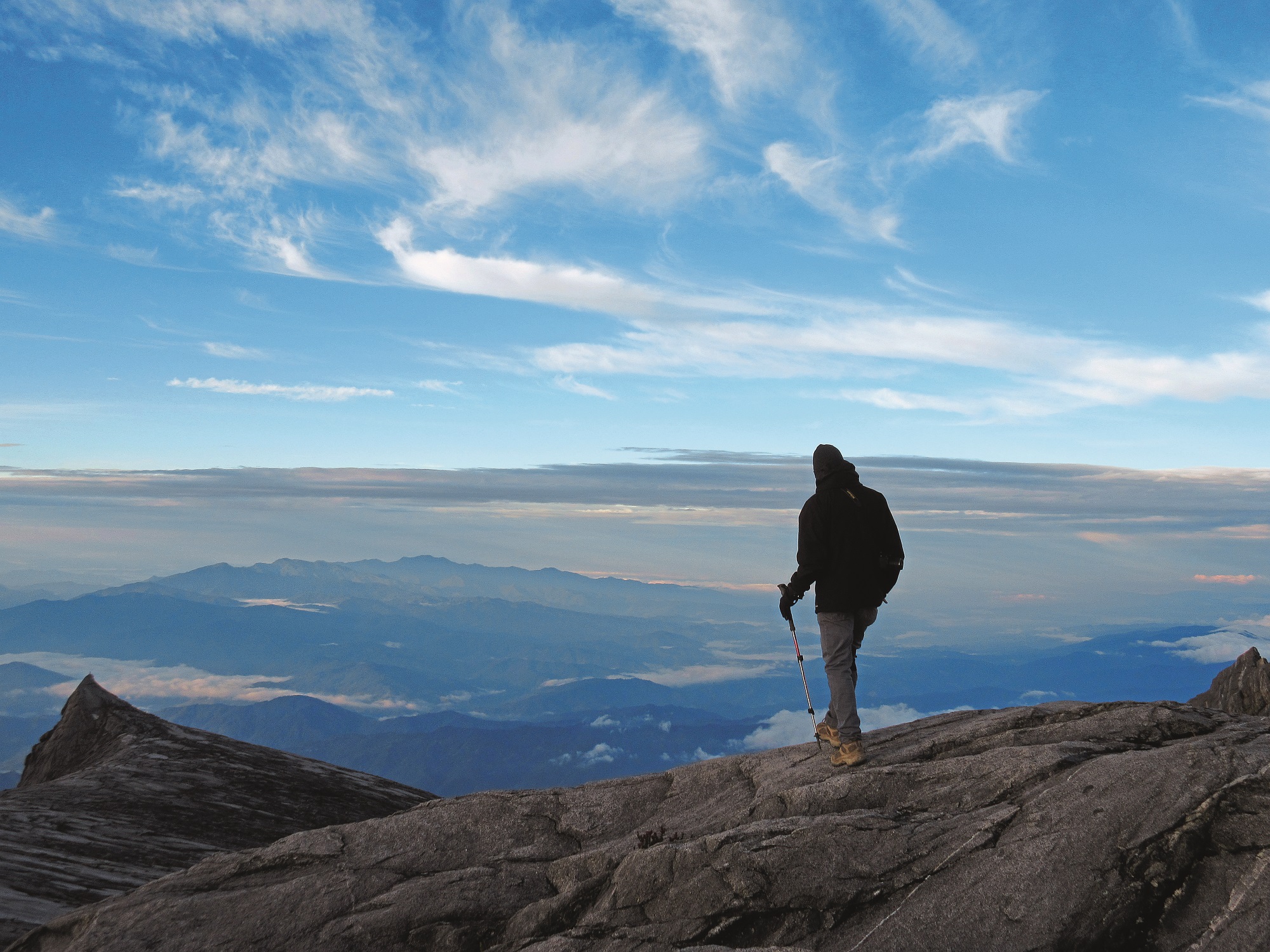 Mountain climbing is not only demanding, it can be dangerous, too. Occasionally, it can even prove deadly, as those who attempt climbs of peaks around the world know all too well. In June of last year, an earthquake on Malaysia’s highest peak claimed the lives of 18 climbers and guides. Nevertheless, climbing mountains will remain a challenging draw for many, and here, Alex Sorenson recounts his own experience conquering Malaysia’s mighty Mount Kinabalu.

Waking at two in the morning to face a long, arduous day of bag-schlepping and a punishing schedule of walking, just to take in a few sights, is the unfortunate reality of travel sometimes. Rarely is it the goal, and even more rarely is it so utterly rewarding, and “awesome,” in the basic definition of the word. This is exactly the sentiment most visitors to Mt. Kinabalu come away with, though. 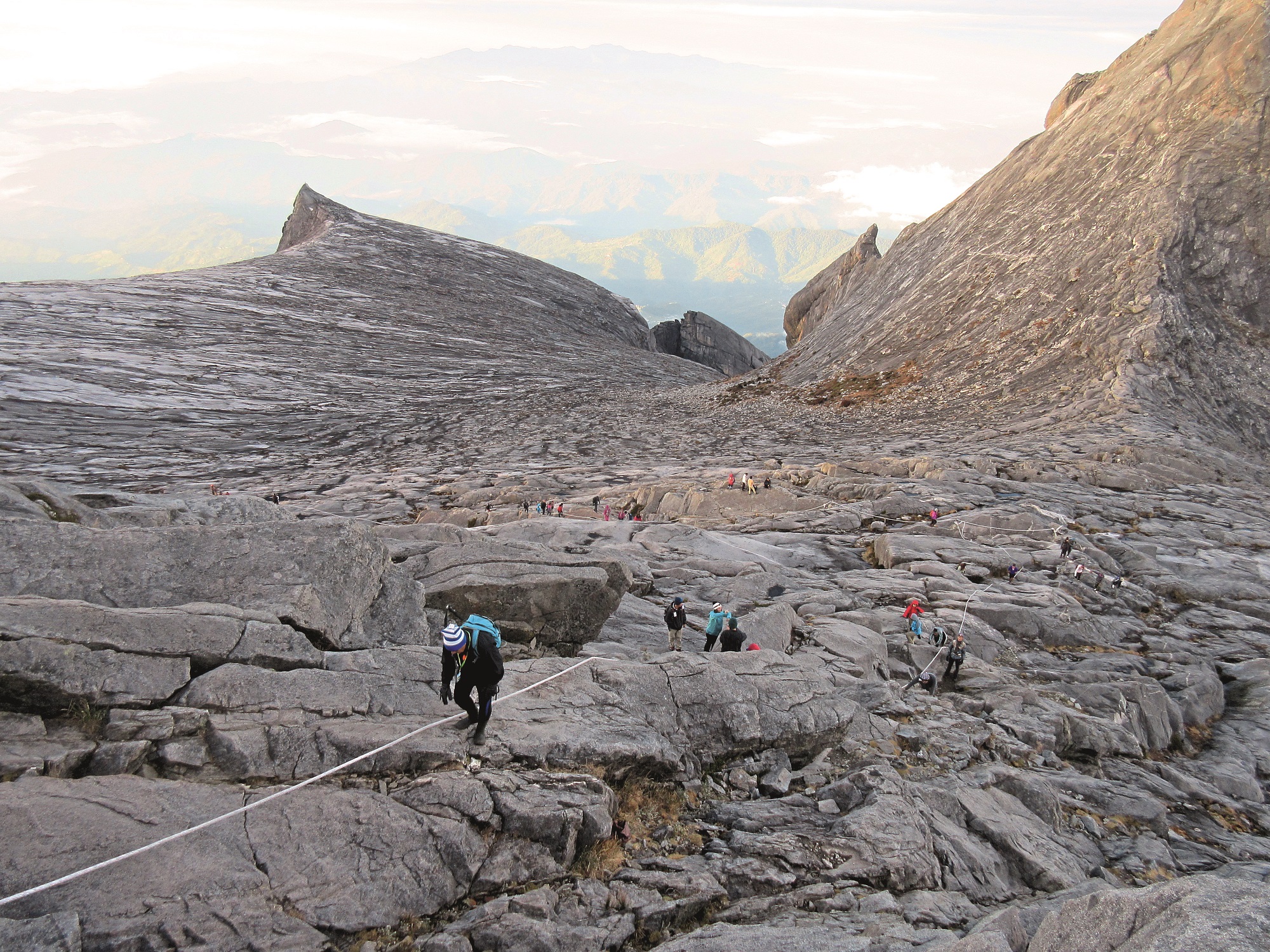 Mt Kinabalu dominates the northern part of Sabah’s landscape, geographically, visually, and culturally. The mountain plays an important part in the legends of the local Kadazan-Dusun, who believe it is the sacred resting grounds of their ancestors’ spirits. It is the largest tourist attraction in Sabah, as the surrounding Kinabalu Park is a UNESCO World Heritage Site and it is the fifth-highest peak in Southeast Asia, at 4,095 meters. 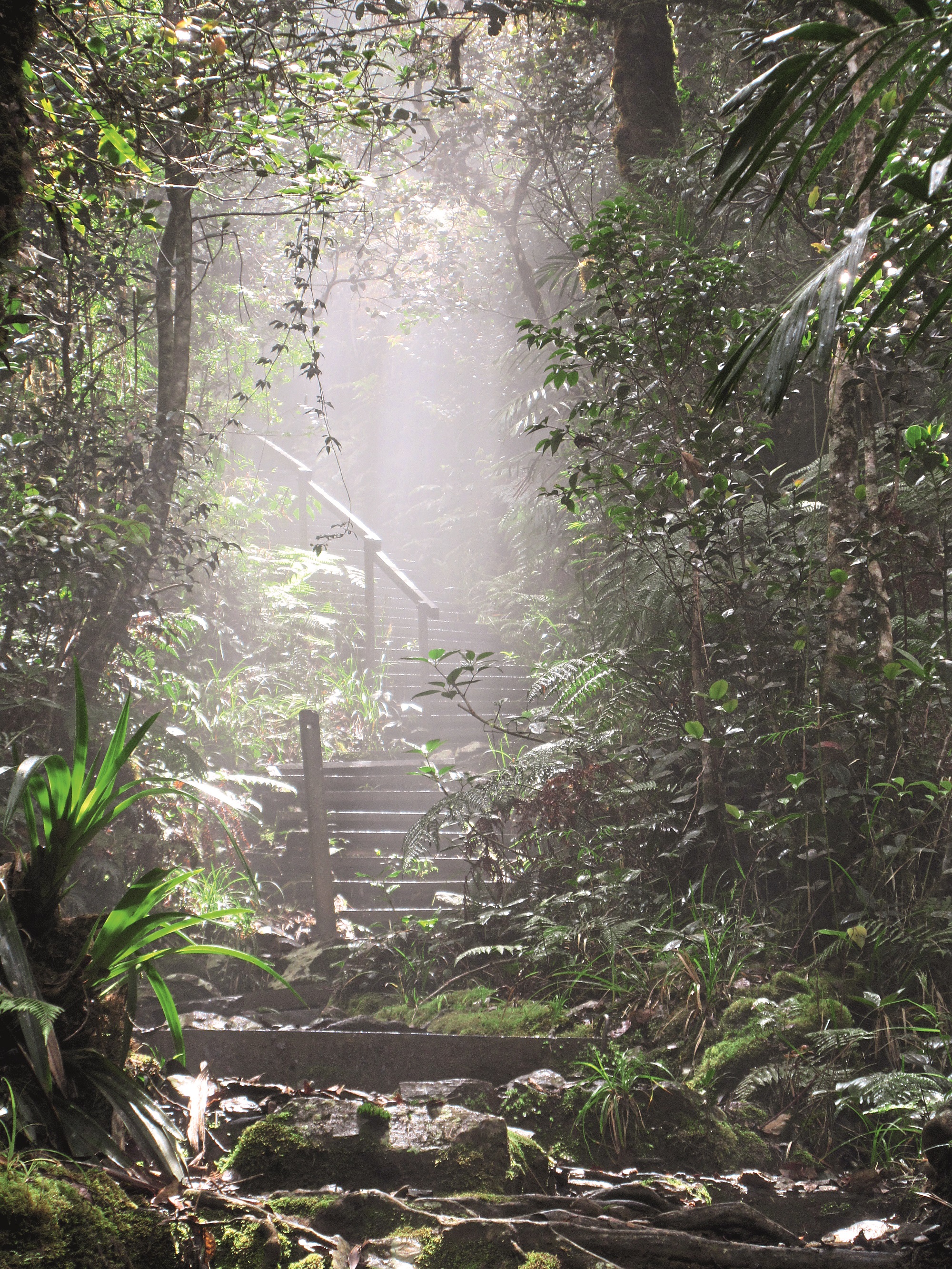 For those interested in plants, the park provides a home for many varieties of orchids, ferns, and pitcher plants, many of which are found nowhere else in the world.

The park has four climatic zones, and encompasses lowland rain forest, montane forest, cloud forest, sub- alpine meadow and the peak of bare granite. The mountain is even continuing to grow at a rate of 5mma year.

Climbing Mt. Kinabalu is one of the premier attractions in Sabah for locals and tourists alike. The climb itself is strenuous, though within reach of anyone with a reasonable level of fitness, and it requires no special equipment.

The first step in the climb is booking your accommodations on the mountain; the climb itself takes two days and requires an overnight stay at Laban Rata, the overnight point near the peak.

These must be booked in advance, as there are only around 150 beds available and they fill up quickly. It is easiest to book through a tour operator. Alternately, you can book directly with Sutera Sanctuary Lodges, the operator of the lodging.

There is a choice between two trails for the first day’s ascent of Mt. Kinabalu. The large majority of people leave from the Park Headquarters and take the Timpohon Trail, which is 6.7 km to Laban Rata, or four to five hours of hiking for the average climber. The alternative is the Mesilau Trail, which is two kilometers longer and can require seven to eight hours of hiking.

Both trails have covered rest huts every kilometer or so and drinkable water stations. The Mesilau Trail is more gradual, with some up and down, has much less traffic and offers more in the way of plants, wildlife, and scenic views. The Timpohon is more direct and is essentially a straight shot up the mountain, which can be a bit grueling at times. There is the option to go up Mesilau and down Timpohon to experience both trails.

The day of our hike, we arrive at Park Headquarters just after 8am, where we meet our guide, Gisa, who we learn lives in a nearby village, has been guiding climbers up the mountain for almost as long as I’ve been alive, and has made the ascent well over 1,000 times. He’s a pleasant, quiet, wizened man, and speaks just enough English to give us directions and point out the occasional feature of interest along the trail. 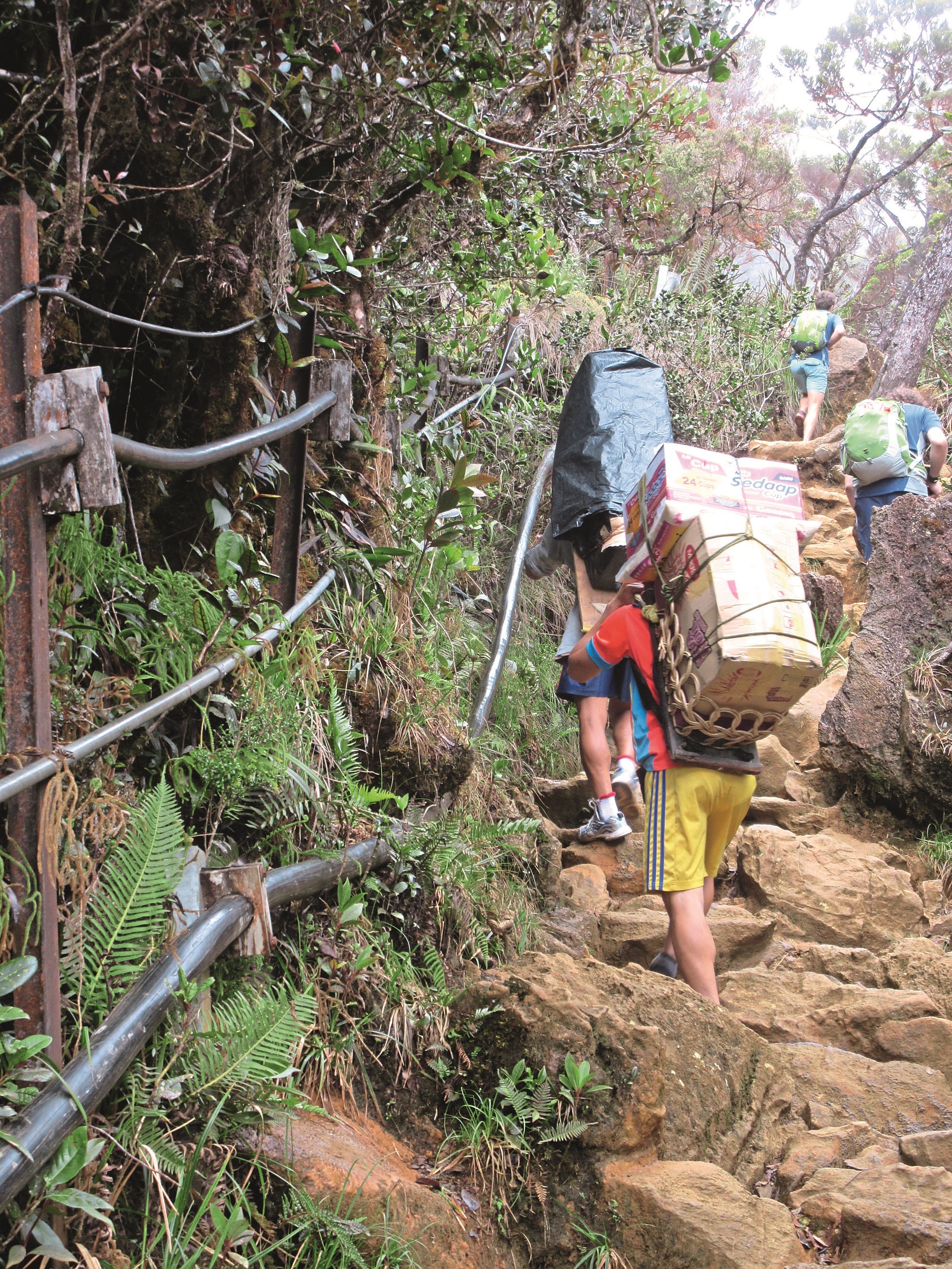 Starting out from the Mesilau gate, we immediately plunge into fairly dense rainforest and start on a steep incline. Almost all of the steep sections of the trail have wooden staircases if there is not a natural stone staircase. Over the first two hours of hiking, we head up steep inclines, down a few valleys to cross streams, back up, and for a long stretch the trail flattens out a bit as it follows a ridge. The climbing is strenuous, but not overly difficult.

The groups of hikers tend to spread out over the first hour or two according to their various paces, and for the most part we hike by ourselves. Rarely are the natural sounds of the forest broken by other hikers. Dozens of black squirrels frolic, and interesting flora is abundant everywhere, including pitcher plants, orchids, and wild ginger.

After about four hours of hiking, we join up with the Timpohon Trail and the traffic picks up greatly. An entertaining – and humbling – feature of the main trail is seeing the porters practically jogging up the trail under their heavy loads. Some are carrying hikers’ packs – usually three pieces of luggage per porter. Others are transporting the necessities of the lodge, including cases of bottled water, wine, beer, and sacks of rice. The men and women with full canisters of cooking gas were impressive, though the man running down with a mattress strapped to his back was our favorite.

With the final kilometer to Laban Rata, the day’s efforts begin to catch up with us. Some brief rain showers cool us down and make the trail a bit more slippery. The trees finally clear and we then find ourselves in a large gravel field surrounded by twisted, shrubby trees, with the lodge looming over us. The mist quickly moves in to obscure everything however; the lodge is at an altitude which seems to keep it almost perpetually clad in misty, swirling clouds.

Checking into the lodge, we are directed to our dorm room, where we meet the Malaysian couple who will be our bunk mates for the evening.We have a couple hours to rest, unpack, wander around, and clean up before dinner starts at 4:30pm. 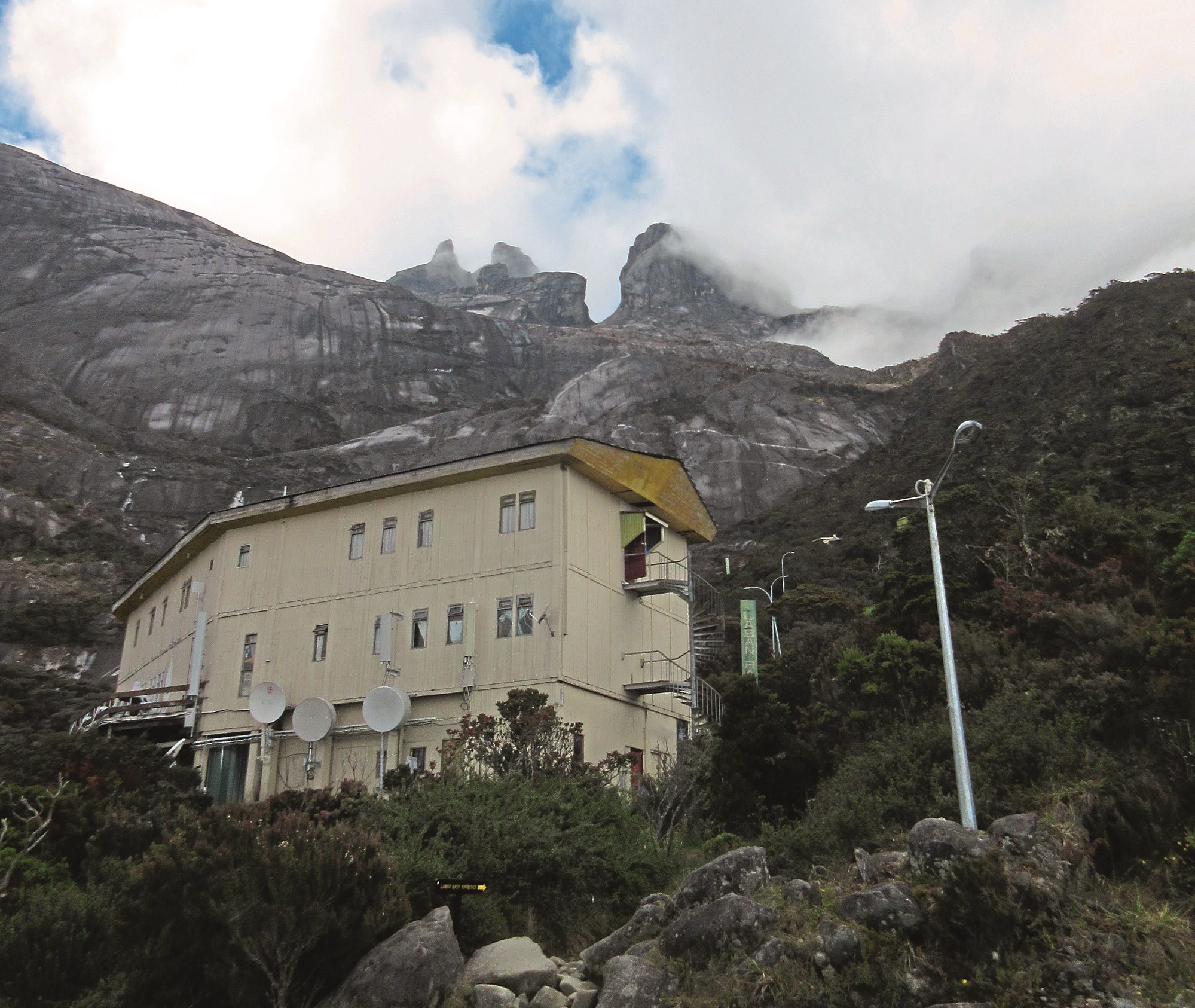 The unheated showers are shockingly frigid, sending most of my muscles into spasms. Beer and wine is available for purchase, but bringing a flask of local brandy, with which to spike the endless hot tea, was the perfect way to unwind while also helping with the chill.

Dinner is served early, and everyone turns in around 8 or 9pm, as we all have to start our final ascent between 2 and 3am. Don’t plan on getting a very good sleep. Many hikers start rising around 1am, and the wooden floors and spring-loaded doors seem to be designed to produce the loudest noises they can, and the larger groups of hikers are not shy with their boisterous enthusiasm, even at this hour. A set of earplugs would be useful to pack.

After a light breakfast, we set off into the pitch black. Head torches are essential for this portion of the climb. Looking up ahead to see a lengthy procession of twinkling headlights on invisible hikers is one of the magical moments of the climb.

The first section of this ascent is largely up wooden staircases, and is thus single file. After about 45 minutes, it opens up and we are mostly climbing up granite faces, often with the aid of permanent guide ropes.We pass a final rest stop with water, and then we find ourselves on large, sheer granite expanses. The slope is gradual enough that the ropes aren’t necessary, and the crowd of climbers spreads out across the face. Below us in the distance we can see the lights of the surrounding towns of Kundasang and Ranau spread out. 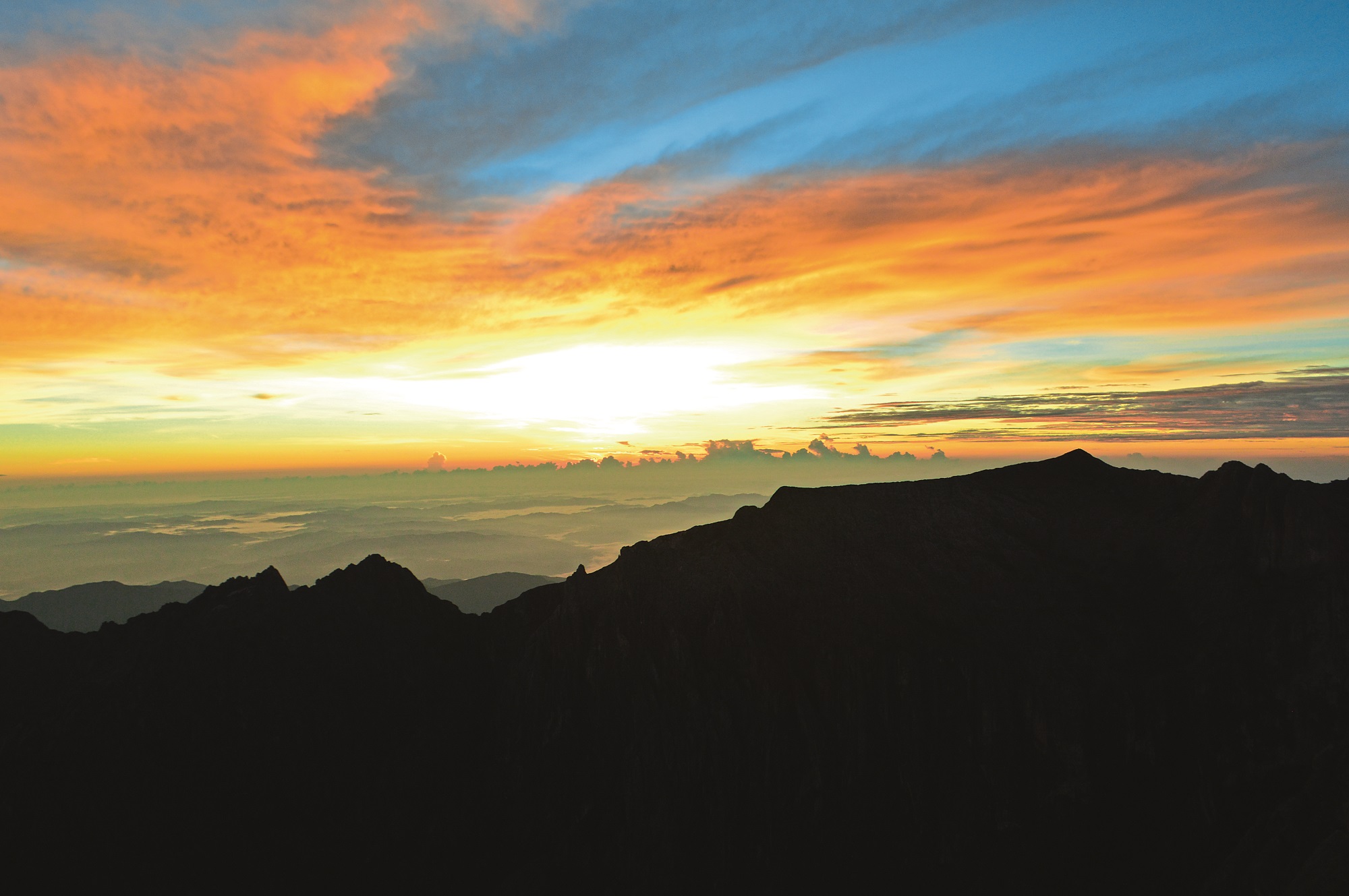 As we approach the peak, the light begins to spread across the horizon from the east and we pick up our pace to make the peak by sunrise. The final few hundred meters of the peak are a steep scramble over boulders, and we crest the peak just in time to catch the sun break the horizon.

Only around 50 people seem to have made it in time for daybreak, and almost all are silent for a few moments in awe as we take in the incredible brilliance of the reds and golds spreading across the dark, jungle-clad hills of Borneo. As more people gain the peak, the crowd becomes a bit more raucous, with people congratulating each other, lots of group pictures, and at least with us, a bit more of that brandy.

We spend about an hour at the peak, watching the morning light spread across northern Borneo and the vibrant green hills emerge from the darkness and the mists. The naked granite of the peak stands out in stark contrast to the lush forest enrobing the landscape in every direction. The temperature hovers around freezing, so even through layers of clothing and gloves, the chill creeps in and we are soon ready for the long journey back. The descent back to the lodge is beautiful.

Above the vegetation line, the views are stunning and we are able to take in everything that was hidden to us a few hours back. We reach the lodge after two hours and dig into the hearty breakfast laid out. After a brief rest, we check out and start the long hike back down.We already have 5.5 kilometers under our belts for the morning, and nearly 10 more stretching before us, but we’re in good spirits and feeling optimistic.Within a few minutes, a couple passes us jogging the other way – the first people up, clearly on the one-day running ascent. 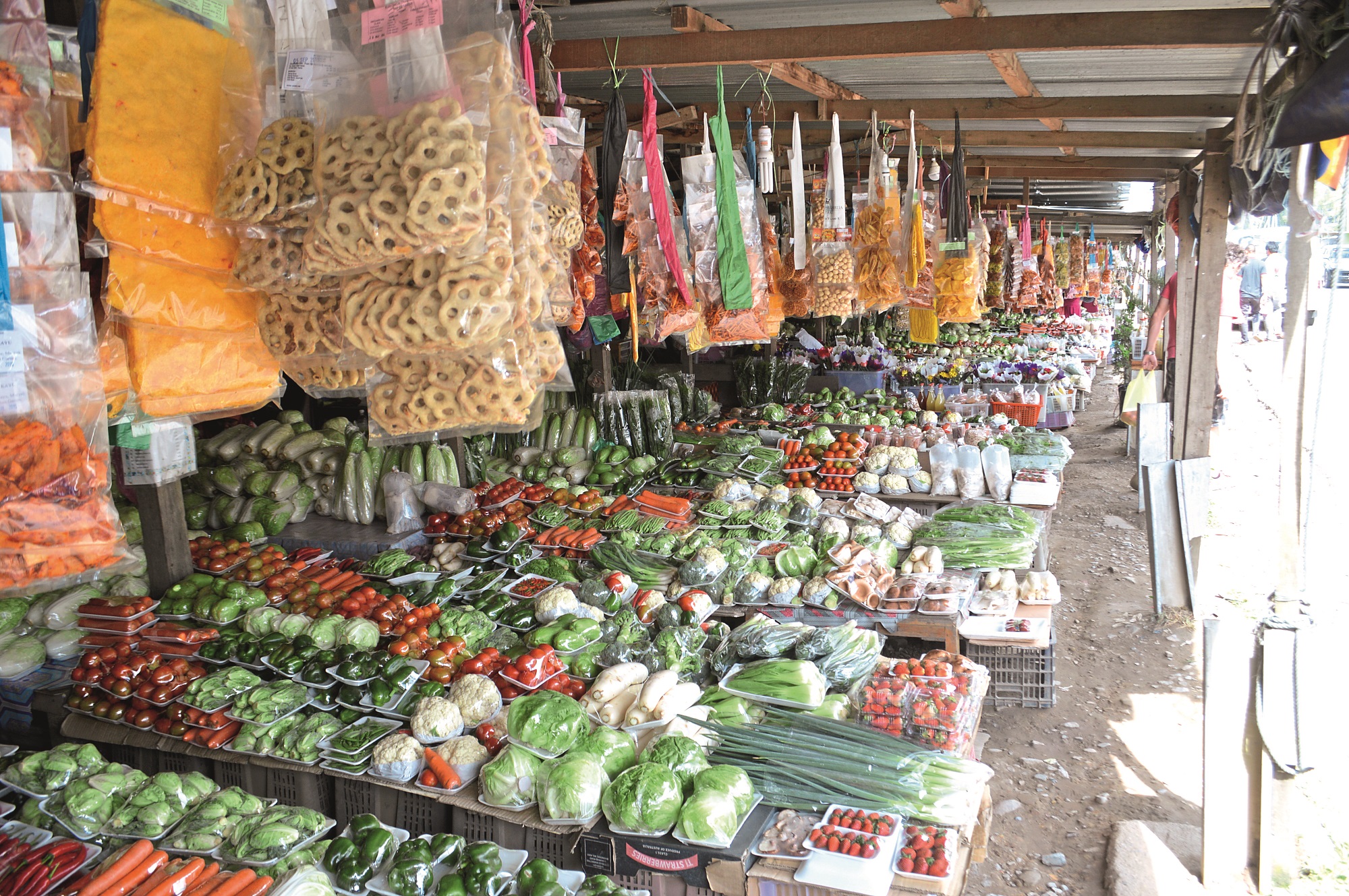 Not far behind them are the first of the army of porters. The hike down was pleasant, at least for the first few hours. We were exhilarated from the experience and from the beauty of the morning. After passing most of the upward-bound hikers, around the final three kilometer mark is when things start to get tough.

The downhill is much slower going than we expected and we begin to really feel the pain in our legs. The up and down nature of the final stretch is both a blessing and a curse, providing much needed relief from the strain on our knees, but then the uphill stretches always last just a bit longer than hoped for. It is with weary triumph that we finally cleared the gate at the bottom.

The days following the climb were physically challenging, as every muscle in our legs was incredibly tight and painful to the touch. Don’t plan anything active for at least two days afterwards, and try to stretch your legs when you finish to help your recovery.

The memories of the rainforest, the flashlight procession up the final leg in the dark, and the stunning sunrise at the peak are memories we will long keep, along with the sense of accomplishment at scaling one of Southeast Asia’s tallest peaks.

How high is it?

Our view was not quite as good PPaul LaingMMarty YoungSScott Brady