So if you’ve been active on social media at all today, you’ll know about the recent release of a new app involving our Prime Minister, Dato’ Seri Najib Razak, and the reactions of those who have downloaded it.

If you’re unaware about what the Najib Razak app contains, it’s basically a platform for people to stay up-to-date with news coming from his social media accounts in just one app. You can read our full review of the app here.

So how is it faring so far?

I think you can judge what the overall comment section on the Google Play store is like based on the ratings but out of the 124 comments left so far, here are some of our top picks.

There are those who left positive reviews. You might notice that many of them are just a single word.

Translation of Asraf Amidun’s review: “The best app every created. Yes, like the title aove, this is the best app I’ve ever downloaded. Even though I was a little upset that there were no games. Maybe introduce an in-game app to add to the funding of the BR1M next year’.

There was a user who wanted extra features he had heard about. 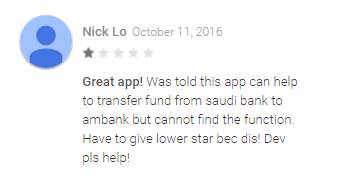 There were also some people who even shared how the app affected the performance of their phone. Translation of Suhaimi Sapian’s comment: “After installing this app, my phone was destroyed by an explosion.” Translation: “After I installed this app on my Nokia 3310, it became a Samsung S7. My face changed from old to young again. Thanks for the apps bro. I give it 5 stars.”

While others had a big monetary question on their minds, or focused on a certain number that has been bandied around. But out of all the comments, this one was definitely a winning one.

Translation: “After I installed the app, my cancer disappeared. Thanks Najib.”