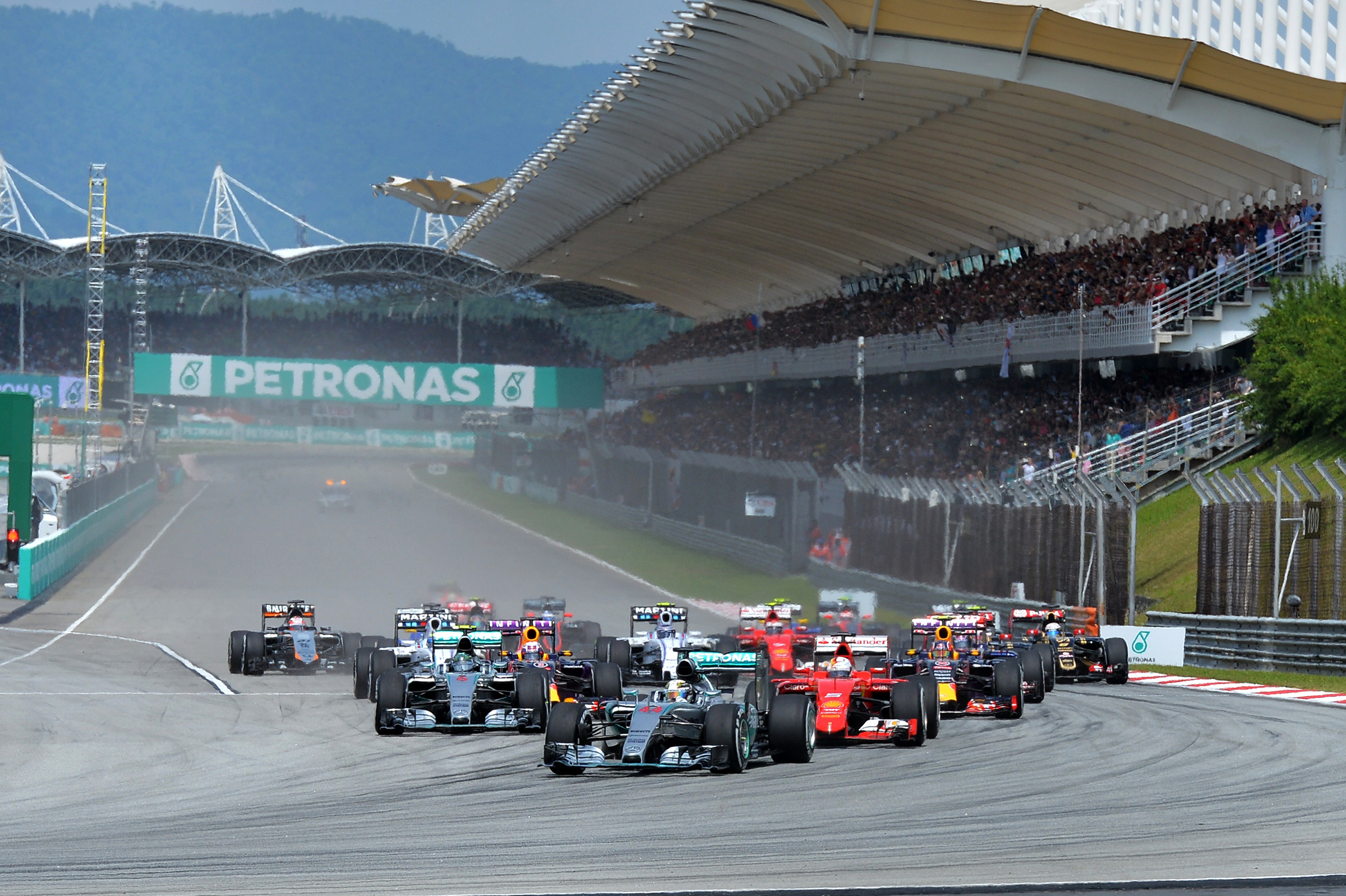 Prime Miniter, Najib Razak, has confirmed that the Cabinet has agreed to terminate Malaysia’s contract for hosting Formula One races, citing high costs and lower returns. In a statement on the Formula One website, it was announced that the 2017 Malaysia Grand Prix will be the countries last after almost two decades of hosting the major motorsport event.

On a positive note, however, two new locations have been added to the 2018 Formula One calendar, France and Germany.

Last month, just after the Formula 1 Malaysia Grand Prix, Malaysia’s Youth and Sports Minister Khairy Jamaluddin tweeted that he thought it would be best for Malaysia to stop hosting F1 races, citing the high cost and limited returns.

He explained that declining interest in the sports has caused ticket sales and TV viewership rates to drop, and the fact that Malaysia now has to compete with Singapore, China, and the Middle East for ticket sales to foreign visitors.

It seems that Malaysia’s Tourism and Culture Minister, Dato’ Seri Mohamed Nazri Abdul Aziz, agrees with Khairy, as he just announced that the country will not be renewing its Formula 1 contract once it expires in 2018. According to a report by the Wall Street Journal, Nazri explained that Malaysia spends about RM300 million per year on hosting the race but the returns do not cover the cost.

He also stated that the cost of hosting has increased steadily since the first race in 1999 and that plus the declining interest has made F1 too expensive to host. However, Nazri did say that Malaysia will continue hosting the Motorcycle Grand Prix which has seen an increase in fans, and is contributing to the tourism industry.

What do you think?

Malaysia still has two races to host before ending the contract, so anything can happen in that time. If the ringgit rises, the economy shows promising growth, and interest in Formula 1 is reignited for whatever reason, maybe the government will consider renewing the contract.

damn!!! will miss the action in Sepang…

What’s your opinion of this Mohan Raj Gurubatham?

It’s never been a good experience. The Moto GP much better

The track will be taken over by the mat rempits then?

I’m thinking the same way mate. who’s the main user after this?

I definitely agree with this. Unfortunately, the F1 organisation has made everything possible to make the sport a torture to watch.
1.- bring back the bloody V8 engines. These stupid vacuum cleaners they call engines are a total disgrace for motor sports. If they want to go green, then go and host Formula E instead of keeping damaging F1
2.- Bring back refuelling. The strategy including refuelling was a lot fun to watch, and with today’s technology it is very safe to do.
3.- Remove the use of technology and electronics. Leave it just for the gearbox changes. Nowadays those cars almost drive by themselves, and that’s why the sport is a shame to watch.

not economically viable anymore so yes i agree

Full board MotoGP. We have MALAYSIANs competing(compared to other sports which has no Malaysian but is more popular and more flowing there with no sporting achievement ). It’s more exciting and people do spend from all level.Sadly the ticket price is increasing too. Also local MNC should also invest on two wheel motorsports. Until when we wanna look at European rider and facility dominate this sport where we have more talents here.

F1 is snobbish and is not fan friendly,. People use to put up with it because the races were sorta interesting. Now with that gone and the increasing prices, it’s become a celeb/rich person (for free I may add) hangout and nothing more.. They should really learn from nascar on how to engage with fans.. It’s the reason u have sponsors in the first place…

Singapore also want to stop the F1 event due to commercial contract between them and F1.

Yes. No more money. Best be prudent. And F1 has failed to benefit the economy.

I heard singapore also want to retract fron hosting f1 starting Next year!!!! A year before Sepang. And we still have bahrain, abu dhabi, china, japan and oz

Move the arena to my residence

As long as we still have the 2 pandas we’ll be ok.

F1 is no longer a family event hence probably why it’s losing its appeal..

so what gonna happen to the Sepang Circuit ? white elephant ?

tell me something new

Well if a business is not profitable for so many years, it makes sense to close it down and replace it with other attractions

Disappointing. First they gave up on WSB now F1.
Sepang is a fabulous circuit but facilities are dire! It’s like taking a step back in time to a club man’s race but at least you could always get a decent burger, pint & a coffee. Sepang can’t even manage that!

Singapore, Malaysia – both shortly after F1 was sold to this American company. Wonder what is going on in the back…

Aye,wasted of money funding it

…. yes, a corrupt govt has no business hosting a prestigious event. The past few F1s have been a real damper especially at it’s tails end when MO1 was allowed to give away the trophy to the winner. Now, what’s an unsporting individual, with a dubious track-record of pilferage has anything to do with the sport ?? Wait till Msia gets a better and more capable leader to warrant such an event. Till then the F1 should stay away from any country with a dubious political record.

If they can’t be bothered to promote it properly they might as well bin it, yes

Fine with me, no problem.
MotoGP in Sepang is much more popular and better.

It seems everyone is giving up right Mohsin?!

Bernie demands too much, and the promoters don’t do a very good job of promoting many of the races (SG a notable exception).

And that’s before we talk about how the FIA has screwed up the last bastion of the true essence of auto racing. I know many fans who have left the sport because of the ridiculous rules changes.

Well, Bernie won’t be around too long thanks to Liberty Media although he still has like 3 years on the contract but I doubt it would go through there. However there are speculations that Liberty would split the job in two should Ecclestone depart, between a commercial head and a Sporting Director.

And yes, Sepang doesn’t do a great job for marketing the event. SG on the other hand had focussed all its prospective events around the GP weekend with delegates attending it across the globe

Msia is broke. China can come.

So you think it’s a good idea Niko?

Yes it is a good idea

o… sadly, 2 countries will not continue to host

Yes we need a track in Penang!!

ExpatGo give over it’s a shit idea

Malaysia can’t do beaches unless they are attached to expensive hotels. As for the race after 2 years I gave up, Singapore is 10 times better. Great facilities and big screens around the track that are big enough to see. A sound system you can hear anywhere and entertainment of a class that Malaysia would never accept because it would probably upset somebodies religious views. If you depend on public transport, getting in and out of the track is a depressing joke. Food options are poor, It’s really a typically Malaysian shambles.

And u also got stuck for a long time. Feel ur pain mr cole

Aaron Ern First year I went, I missed the start of the race by 5 minutes even though I got the transport from the airport over an hour before the race was due to start and then the waiting and waiting after the race in long, long queues, very depressing.

Yeah. Remove religious restrictions. Not like they can drive properly in the first place

I thought Singapore will discontinue even earlier than Malaysia ? http://www.cnbc.com/2016/11/20/singapores-2017-f1-grand-prix-will-be-last-one-says-bernie-ecclestone.html

Yup, everyone is giving up!

https://www.google.com/amp/uk.mobile.reuters.com/article/amp/idUKKBN13G0CW?client=ms-android-samsung
This article says something a little different….

No don’t agree at all. Disappointed

Terrible news. Kl has few events during the year from 2019 even less