We’ve all heard the hype: Malaysia has finally been graced by one of the leaders of Internet TV, Netflix. The company, who call the service the ‘global TV network’, has welcomed 130 new countries to its streaming service this year, making it a total of 190 countries in the Netflix family.

Netflix’s boss Reed Hastings revealed that global users have watched 42.5 billion hours of content on the site to date, of which 12 billion was in the last three months of 2015. That’s an almost 50 per cent increase from 2014.

And now Malaysian residents can add Netflix binge-watching sessions to their still-new 2016 calendar – but the main question is this: seeing as we are already spoilt for choice with other internet TV platforms including iflix, is the Netflix subscription – from RM33 as of launch – worth the cost?

First, there is a difference between the content of US Netflix and the Netflix available in Malaysia. Here, you won’t be able to watch content like some Korean and Japanese anime and TV series. You also won’t be able to watch a lot of American content such as Agents of Shield, New Girl, How I Met Your Mother, Prison Break, Breaking Bad and Friends.

Fret not, there are still plenty of other movies and TV shows you can get your hands on (yes, we know, nothing beats Friends), such as the Breaking Bad spin-off Better Call Saul, so you still get to be that couch potato you dreamed of when they announced the Netflix launch.

Of course, you don’t need to be on the couch to watch Netflix nowadays. There is an array of media to enjoy Netflix, besides the usual platforms such as web browser and smart TV. Most modern games consoles including PS4 and XBOX ONE have built-in Netflix apps and you can even watch content on your mobile devices, with dedicated apps for Android, iOS and Windows. Now you can Netflix on the go, not just Netflix and chill. 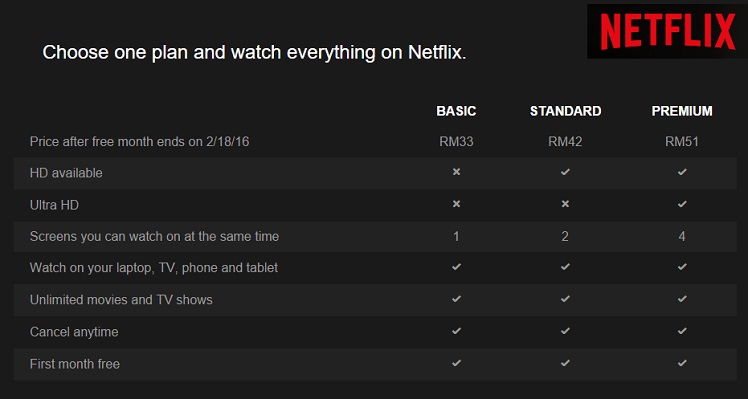 There are only two differences between the three packages. One is the availability of High Definition (you won’t have HD in your Basic package or Ultra HD in your Standard package). The other is the number of screens you can watch on at the same time, which are 1, 2 and 4 respectively.

Even with all the censorship that Malaysia’s powers that be have been making and want to make, Netflix has no censored content – of the shows and movies that are available. That means you have full access to the uncensored version of movies and TV shows that can be found within the Netflix library.

So it might be a fair assumption that the reason you can’t access some shows is not because they haven’t been released in Malaysia yet, but because local licensing laws are stopping them being broadcast (at least until the laws change, if they ever do).

For the parents and guardians out there, this also implies that you should do a few quick checks before letting your kids get access to the list of movies and shows on Netflix.

The verdict: is it worth it?

With the apparently limited contents available, you might wonder if it is still worth your money – especially since you might still be forking out for your Astro paid TV and iflix subscription as well.

Fortunately, there’s an easy way to choose: take advantage of Netflix’s one month free subscription and see for yourself. You’ll need to enter your credit card details during registration but if you cancel your subscription after the one-month period, you won’t be charged.

If you do enjoy the service and want to start paying, you can also rest assured that you can unsubscribe at any time. So, on your marks, ready, set, binge!

Learn about the launch of Netflix in Malaysia

View a list of 15 great entertainment apps for Malaysian residents

What exactly is censored? Been watching tonnes of stuff, nothing seems to be censored

With censors not worth it at all. Waste of money.