In this golden age where the Internet has made its presence felt in all spheres of life, it is quite common to find a Wi-Fi router in a home or an office. Whether it is for entertainment, business, or personal purposes, we all use the Internet on day-to-day tasks. As such, having a good router essentially means having a good hub for all of your devices. Having a good Wi-Fi router can make a huge difference in the quality of the wireless Internet you receive, especially since the second generation of routers, that are 802.11ac enabled (802.11ac is 3x faster than the previous 802.11n standard), have been recently released.

Here are five great Wi-Fi routers that will satisfy your demand for a high quality wireless Internet connection. 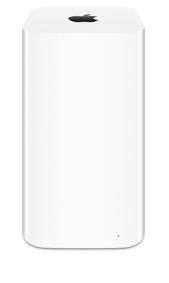 Both of Apple’s AirPort wireless routers are small, certainly not an eyesore (depending on your design tastes), easy to set up, can fit almost anywhere and can be remotely managed with an iOS device. Users who buy either versions of Apple’s AirPort mostly do so for its “quick set up and forget” practicality, its focus on network quality and its solid performance with other Apple devices. The Extreme and Time Capsule versions are Apple’s most powerful wireless routers to date, packing dual-band 802.11ac wireless capabilities, wireless printing and beam-forming, with the latter version having the combined capabilities of an external back up hard drive. Although the device is pricey, RM649 for the Extreme and RM999 for the 2TB version of the Time Capsule, it is worth it if you are heavily invested in the Apple ecosystem. Wherever I turn, tech reviewers seem to be praising Asus’ RT-AC66U for being THE wireless router of the times. They say that, apart from being extremely easy to set up, the device comes in a unique and intriguing design, with three upgradeable antennas to boot. It also has a healthy selection of ports (four Ethernet, two built-in USB ports), great range, blazing fast 802.11ac performance and dual-band transmitters.  Additionally, the router comes with built-in software for management and advanced configuration options, for those who would like to tweak it further. Gaming website IGN even recommends the RT-AC66U for being a reliable router to use in order to ensure smooth gaming connectivity. The RT-AC66U goes for around RM600. The Netgear AC1900 Nighthawk borrows its name and design from the infamous Lockheed Martin F-117 stealth bomber that goes by the same name. Looking like a stealth bomber doesn’t actually suggest performance of the same caliber however; although its design is supposedly meant to help boost signal strength. Fortunately, Netgear has delivered a great deal on the performance front. It has all the necessary components to put it in the top tier: dual-band transmission, 802.11ac wireless, NVIDIA’s GameStream technology, great port selections (four Ethernet, two USB), always-on downloading, printer sharing, built-in VPN, guest networking, parental controls, Apple AirPlay and Time Machine support and many more. It even streams HD videos like a charm. Reviewers have praised its incredible range, sleek appearance and reliability. Although the router isn’t available locally in  Malaysia at the moment, those dying to buy it can do so at the Malaysian eBay store or at American electronics website, iPmar,t for around RM700+ (without shipping). According to PCMag, this is the fastest router that they have tested to date. They even mention that while the Nighthawk has an edge over the EA6900 in some features, this router is still faster in terms of pure speed, range and NAS (network attached storage) performance. It also has very good cloud-based management tools; on top of a hit-or-miss black and metal design. Similar to the other top tiered routers mentioned here, the EA6900 has dual band 802.11ac wireless and six ports (four Ethernet, two USB), besides its good network quality. On the downside, the router itself is pretty expensive, fetching around RM850 on eBay Malaysia, a hefty price to pay even for great network quality. The cheapest and oldest of the bunch, Asus’ RT-N56U is neither cutting edge nor recent, but it still manages to pack quite a punch even as 802.11ac is slowly trying to be the next standard. One reviewer from thewirecutter mentions that Asus’ has outdone wireless king Cisco in creating a gem of a Wi-Fi router. While the RT-N56U doesn’t sport 802.11ac (it is equipped with n), it has dual-band transmission for better handling of multiple devices that operate on different frequencies, excellent range and a great speed of up to 300Mbps, considering its RM350 price tag. Its affordability and capability make it an excellent router, definitely good enough to last until 802.11n ultimately becomes too slow.

Which one should I choose?

Get Apple’s Time Capsule if you are an Apple fan and want the combined capabilities of a good wireless router and a shared backup external hard disk. Apple’s typical ease of use will surely allow you to get this machine up and running within minutes upon opening up the box.

If you want something that focuses on speed, HD streaming, with a little bit of security encased in a sleek black box, opt for the Nighthawk. Although it might be expensive, you can rest assured that you’ll be spending your money on one of the best routers available. Additionally, the Nighthawk, or even the Linksys router, is good enough to run for a small office of up to 10 people.

If money is an issue and you just want something that works great for now, get the Asus RT-N56U. It’s not too expensive and it works well with most current devices. Plus, even though it has been out for a while, its popularity is evidence of its reliability.